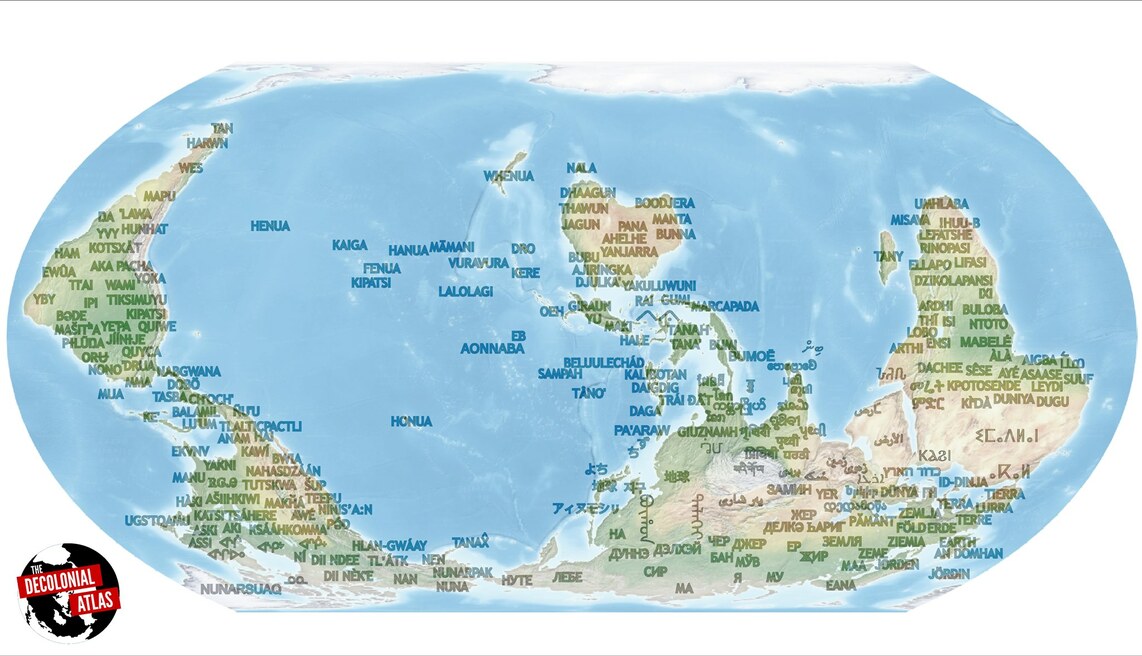 Maps for the people and planet.
decolonialatlas.com

Our world is home to a magnificent variety of plants and animals and cultures and languages. But (in)human activity has increased the species extinction rate to 10,000 times the historically normal rate, and of the planet’s 7,000 languages, most are predicted to go silent in the next century. This is the biocultural extinction crisis – the converging losses of biodiversity and cultural diversity that will forever change our world unless we act now.

Politicians will talk of spreading democracy, when what they mean is installing governments that will uphold an economic system that's fundamentally incompatible with democracy.

Business people will tell us there's no alternative to investor-owned corporations, while 85% of people worldwide don't feel engaged in their jobs, and this business model is literally killing the planet, and worker cooperatives are already a proven alternative.

White supremacists are still wrapping their racism in pseudoscience.

In 1994, the Zapatista uprising deprivatized large swaths of Chiapas, putting the land back under Indigenous stewardship. For the past 26 years, Zapatista communities have been growing the infrastructure of self-governance, establishing worker coorperatives, and teaching children in their Maya langauges.

Another world is possible.
#EZLN

As leader of the party that's ruled Japan almost continuously since 1955, Shinzo Abe's campaign slogan was Kono Michi Shikanai “There Is No Other Way.” Abe's only genuine opposition in government came from the Japanese Communist Party, a continual force against militarism and neoliberalism for 100 years. There is another way.

Map: Vote share for the Japanese Communist Party's proportional vote list in the 2019 House of Councillors election, by prefecture.

The land. The people. All bound together.

Liberals. For the last time. Seceding, renouncing your US citizenship, or boycotting the South won't help anyone.

So then we're basically cool with the fact that 85% of US counties are unlivable?

Sharing these resources via abortionfunds.org if you need an abortion or if you have $ to support these funds.

It's serviceberry season, and the required reading is Robin Wall Kimmerer's essay "The Serviceberry: An Economy of Abundance" which you can read here:

In a world of abundance, famine is not a natural disaster. It's a crime against humanity that has perpetrators. And if millions of starving people isn't top news, the media are accomplices.

The Idaho stop legislates what all cyclists already do safely. Without it, cops can use minor cycling violations to conduct racially biased pretext stops (biking while Black) and reach their quotas. In NYC, the fine for biking and driving through a red light is the same: $190.

Indigeneity is often erased in the immigrant narrative of the US. Displaced Indigenous migrant communities in the United States have historically been undercounted in the Census due to many being classified under Hispanic/Latino.

At the same time, we must resist the erasure of the Indigenous peoples of this land - the Tongva, Chumash, Cahuilla, and others. The Chicanx concept of Aztlán, asserting California as the mythic Aztec homeland, contributes to that erasure.

Maps for the people and planet.
decolonialatlas.com