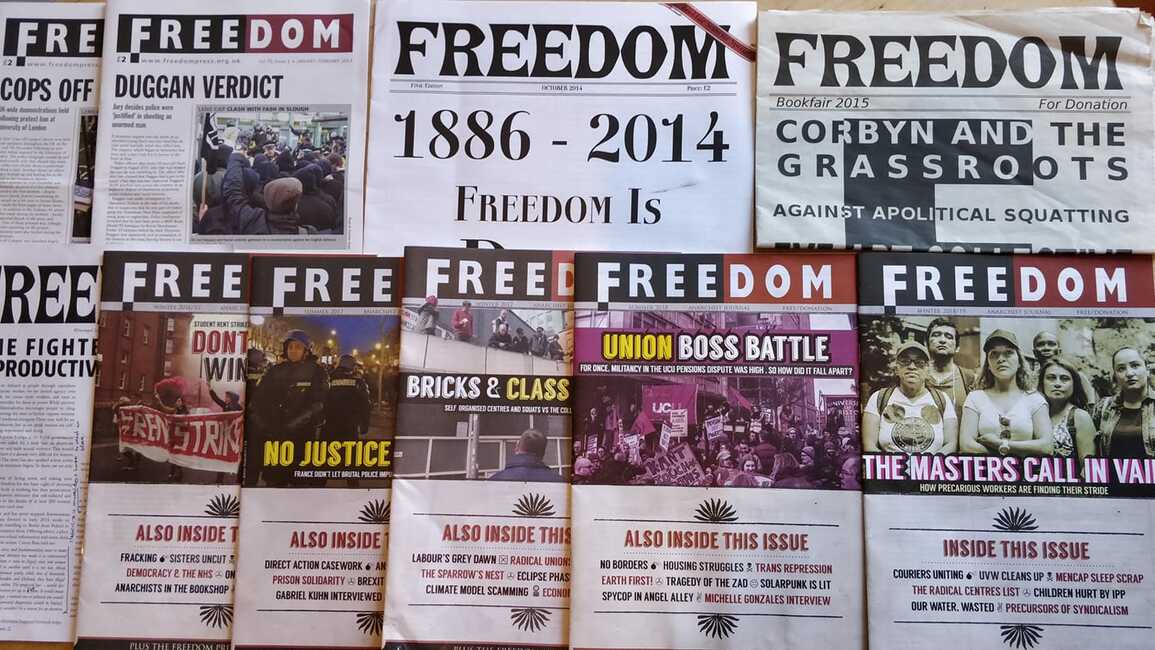 Pamphlet Extract: Workers’ struggles in the lockdown
The Angry Workers of the World has launched a new pamphlet today taking a concerted look at the current crisis and asking: What can working class people do about it? In this extract from the full report, discussion turns to examples of grassroots workplace resistance amid a stifling failure to act by union "le
https://freedomnews.org.uk/pamphlet-extract-workers-struggles-in-the-lockdown/
#AngryWorkers #COVID-19 #pamphlet #TradeUnions "Even if there is no military, armed conflict here, we are under constant fire, the goal of which is to keep the population passive and to pressure, isolate and ultimately “neutralize” us as revolutionaries." - Counterinsurgency as a strategy of domination -> https://enoughisenough14.org/2021/03/30/counterinsurgency-strategy-as-an-instrument-of-domination/

A nice little film based on the book we published, "Invisible - A Diary of Rough Sleeping in Britain" by Andrew Fraser

More than worth 19 minutes of your time

Talking of Kate Evans, Threads from the Refugee Crisis is a heart breaking graphic novel that combines the techniques of eyewitness reportage with the medium of comic-book storytelling.
At a time when the government is determined to scapegoat refugees it is vital to bring their stories to the surface to make them front and centre of the discussion.

Freedom and Empire, 1948
In his second article looking at recent editions to the Freedom digital archive, historian Jack Saundrs considers the anarchists' take on Britain's declining imperial holdings as another vicious conflict broke out just a few years on from World War II — the Malayan Emergency.

In the immediate aftermath of the Second World War, the governors of the British Empire ha
https://freedomnews.org.uk/freedom-and-empire-1948/
#1948 #Freedomnewspaper #imperialism #Malaya

Please follow our comrades from @bookfairldn you won't regret it!

We've got a whole range of pamphlets available on the website - including this blast from the past by Kate Evans that tears the PR industry a new one.

Deliveroo workers to strike over exploitative practices and low pay
Hundreds of Deliveroo riders from across the UK are expected to strike in an action to coincide with the company's IPO valuation, taking place on the 7th of April.

Belarus: anarchist and antifascist Igor Bancer released from prison
Belarussian activist, antifascist and the singer of street punk band Mister X- Igor Bancer have been released from prison following a court verdict sentencing him to 18 months of forced labour. He has spent nearly 5 months under arrest prior to sentencing.
Banc
https://freedomnews.org.uk/belarus-anarchist-and-antifascist-igor-bancer-released-from-prison/
#AlexanderLukashenko #Belarus #BelarusProtests #IgorBancer #MisterX

Callous Incompetence, Corrupt Cronyism, Jealous Repression: One Year On, What is the Covid State?
Last year, I wrote in this blog that the UK government’s response to the Covid-19 pandemic crisis was one of ‘callous incompetence’.[1] In hindsight, that was no surprise: their incompetence
https://freedomnews.org.uk/callous-incompetence-corrupt-cronyism-jealous-repression-one-year-on-what-is-the-covid-state/
#borisjohnson #corruption #COVID-19 #cronyism #mutualaid #vaccine #vaccinepassport #OtD 25 Mar 1939 the Nazis brought in a new law forcing all 10-18y olds into the Hitler Youth. Despite Nazi efforts, thousands of working class teens formed the Edelweiss Pirates, who fought the Hitler Youth and helped Jews and POWs. More in our podcast: https://workingclasshistory.com/2018/04/04/wch4-anti-nazi-youth-movements-in-world-war-ii/

On the necessity of activist legal support in the wake of police repression
Like the Black Lives Matter protests of last year, the wave of protests against the Policing Crimes and Sentencing Bill have been met by police repression. But, again like last year, they have also been met by dedicated legal support activsts providing basic, vital solid
https://freedomnews.org.uk/on-the-necessity-of-activist-legal-support-in-the-wake-of-police-repression/
#Legalsupport #policerepression #Protest

Freedom and the 1974 Miners’ Strike
Jack Saundrs looks over some recent additions to Freedom's extensive digital archive, which draws together unique scans and mirrored works to create a sizeable library of the paper's historic works. The 1974 papers set was first scanned by the excellent Sparrows' Nest.

Reflections on the riot in Bristol
Yesterday Bristol erupted into rioting in what is likely to amount to the first instance of new forms of resistance to the draconian Policing, Crime, Sentencing and Courts Bill. Following on social media it was hard to tell exactly what was transpiring outside the images of objectively cool people doing kickflips in front of b
https://freedomnews.org.uk/reflections-on-the-riot-in-bristol/
#Bristol #Police #politicalpolicing #Protest #Riots #SarahEverard

Book Review: Emma Goldman, ‘Mother Earth’ and the Anarchist Awakening
"This important and essential volume by Rachel Hsu goes back to the primary sources in an attempt to allow the ideas and actions of Goldman to speak for themselves."